Stretches of green midst clinically linear architecture settlements. The air-view above few feet in the sky offered spectacular view of Rome. Nature and architecture at its resonating best, Rome was the first European city we visited, and it surely did build high expectations for others to follow. For its architecture and more importantly the care with which it has been preserved, Rome is a benchmark for tourist cities in the world.

A cradle for civilization with an architecture that is worth sustaining entire city's economy tourism on its own, some say Rome is Eternal because of its culture and architecture. Undoubtedly, it survived anciently, it excels today, and for sure shows path to other cities of future. Our trip in mid-January 2013 was primarily because we chose Italy for the weather it offered in that time of the year and its delicious food, and vegetarian options compared to its northern European siblings.

International airport at Rome is efficient and modern. Checking out is easy and hassle free. The drizzle and nip in the air welcomed us outside the airport. The local metro/train station is just on the opposite side of the airport and there is a very good public transportation system overall in Rome. The train to Rome city costed around 13 Euros pp . However, priced almost the same, the shared mini bus (also outside the airport) was more fun and we went ahead with our front seats. It wasn't sunny, yet the outskirts of Rome set the tone for our two days odd trip to Rome. Windmills and carefully mowed gardens accentuated the beautiful landscape. The bus dropped us just outside the Roma Termini, the main train station for the city. Hotel Milan, where we stayed was quite near to termini, and it simply is a blessing to stay close to the transport hubs. It gels well, the way we wanted to explore the city saving precious time and fatigue.

A suggestion here: If travelling for less than 3 days in any city, stay as close to station, as possible. More so applicable for the Italian cities.You'd save a LOT of time.Trust me.

After laying down for a while, we felt rejuvenated enough to grab some slices of pizza around the neighbourhood restaurant. It was fresh, crisp and appropriately spiced. Neat and effective. Similar to food throughout our stay in Italy. As  dusk was approaching us with some vigor with clouds playing peek-a-boo with the sunshine, we had to have our plans in order, rather quickly. The reception in the hotel had functional travel maps which were useful for us to begin our journey. From Termini we took a red line metro to Barberini and walked our way post that to Fontana-De-Trivi. It was dark by the time we reached at fountain. It was amazing to see several people enjoying  and refreshing their senses around the place, both locals and tourists alike. Shops selling branded products were close by.

Relaxed, we next headed towards Palazzo Montecitorio and then to Piazza Navone, exploring the amazing city through its streets. The part of the city is quite up-market and products are expensive. (Btw: The squares in Italian cities are referred as Piazza and street names begin with Via.) Some steep steps above and  the view holds you to a marvelous architecture. It was around eight, and the shops as if suddenly closed with only exceptions being the bars and the coffee shops.

We walked our way through to Via del Corso (it was indeed expensive) to reach back Barberini and subsequently to Termini. We had not taken any pass for public transport for this day. Termini has some really good shops in its complex, which offered handsome discounts too, and more importantly were open. We had our dinner after shopping a bit and then headed few steps to reach our hotel around 10. The amazing city held its charm so much so that we decided to hit the Roman streets. Rome is a pretty safe city. A cup of cappuccino and some magical and authentic pizza slices down the throat gives you that amazing feeling.

Conversation at Reception
Once back, the receptionist at the hotel and I picked up the conversation, primarily as I sought some information for our travel next day. While shopping through the windows that evening, I just wondered if everyone could afford the super expensive Armanis and others. It was heartening :) to know that not many locals shopped in the city and actually went to company outlets once a month or so. One could feel the general restlessness about the extant recession and the death of the Italian Lira. 'Euro has ruined our life', he shared wryly also emphasizing that taking credit from institutions and repaying was getting difficult day by day. The talk with the men on street is worth a 100 books, and this bit of conversation re-affirmed that. We retired after a fabulous day. Chao.

Few meters away from our Hotel was 'Piazza della Repubblica'. We took off for our early morning walk and it was a wonderful feeling to make the ideal start to the day. The morning freshness could still be felt  around, while birds flogged their way to create peace through their noise. The place was superb. The feeling even better!

We then paid visit to a local market, that sold dry fruits, winter-wear (jackets, mufflers etc.),vegetables and meat. Prices were fairly low, in fact you find the prices to be lowest in Rome. (It's downtown though!.). Complimenting our last day's exploration on feet, 'Hop-on, Hop-Off' bus was our choice for today. It's highly recommended that you take this mode to discover Rome at your leisurely pace. We took Green bus and should say we were fairly happy with its service (there are other services too). You can hold your breath with the Roma views and with a price tag of 13 Euros pp, it's simply worth it. The pamphlets of major bus services can be fund in the hotels while tickets can be bought in the bus or around the emanating station. The process is simple and there are multi lingual audio guides available on the bus. And yes, the deck seats are better any day! There are scheduled bus stops around the major attractions and one has to buy ticket only once for the day. The periodicity of the repeat in around half an hour. It is highly advisable to take a day tour followed by the night journey to view Rome(without alighting from the bus) in the last shuttle that runs around 7 pm from Termini. 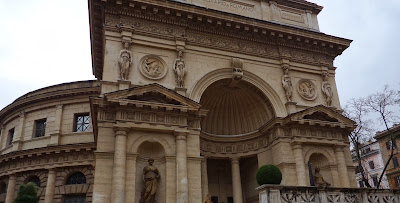 Taking our first bus at 11am we had sufficient time to see the major attractions of the day. You can start earlier too. Colosseum, major art museums and also to Vatican. (The Vatican post would follow this.) In between, we grabbed our bites of pizza and several life(chill) saving cappuccino at one of the coffee shop  in the afternoon .  Our Indian snacks helped too. The night view that Hop-on and Hop-off offered us was astonishing! The monuments are lit meticulously and the do make your way for the night trip, something that is highly recommended.

We would love to go back to Rome several times. Rome still bequeaths with its glory and the more so, the way that glory has been preserved. We left for Naples around 10 in the morning through Tren Italia from Roma Termini, next day.


Shop What
Rome is very expensive. Some Shopping ideas may include:
The suburban towns around Rome have company outlets that are far cheaper than main city.
Visit Italy during annual season sale that generally takes place in January.

Best Time to travel is during the sale season.
Be equipped with appropriate winter wear, the chill can surprise you.
The public transport passes may not be needed if you are using Hop on and Hop off.
You'll find a lot of vegetarian options, especially with pizza and the chefs won't surprise you with their expression hearing 'vegetarian'.

Bablish Joshi
Travel Enthusiast. Lot to learn. Lot to share. Many miles to cover. Many stories out there.

As Close As We Are Far

As close, as we are far My heart just skips, the beat for you dove, She grimaced, I faced, our worlds that had raced Contours that w...